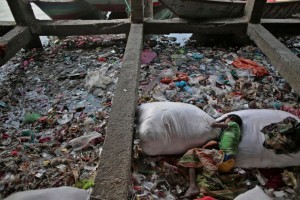 Homeless in Dhaka, Bangladesh: Bangladesh is referred to as one of the “developing countries.” That’s another verbal obfuscation meant to suggest that if the country just keeps chugging along someday it too will achieve the capitalist dream. Forbes magazine, the voice of US capitalism, thinks Bangladesh is doing quite nicely in its economic growth & boasted that in terms of public opinion, Bangladesh is a “capitalist haven” & the most pro-capitalist country in South Asia according to a Pew poll. Over 90% of the Bangladeshi billionaires & millionaires they interviewed agreed that plunder & exploitation of working people couldn’t be better.

One wonders if this little homeless girl was polled–or any of the estimated 250,000 to four million homeless children? What about the garment workers in sweatshops who protest for safe work conditions & decent wages? Or those who’ve lost beloved family members in factory fires & collapses? What about the over 46% of people who live under US $1.25 a day (in 2010)?

This small vulnerable child must be terrified to live on the street, subject to abuse, starvation, exploitations & violence of every kind. She is sleeping on a garbage bag on the bank of Dhaka’s main river, the Buriganga. Because the government does not enforce environmental laws for tanneries (leather is a major export industry), they dump an estimated 75 metric tons daily of solid waste (containing animal flesh, dissolved hair, fats) & liquid waste (dyes, chemicals, pesticides, lime, formaldehyde, bleach, heavy metals, sulfuric acid, lead) into the Buriganga. Since there are also no protective laws for workers, tannery workers suffer many health conditions–particularly skin & respiratory ailments & disfigured or amputated limbs. They endure discolored, itchy, peeling, acid-burned, & rash-covered skin; fingers corroded to stumps; aches, dizziness, nausea. This child, forced to sleep on the bank of the river, will suffer the same ailments without any health care.

Bangladesh claims its foreign policy is guided by the principle of “friendship towards all & malice towards none.” So poetic & so full of baloney! It’s a key ally of the US in South Asia & conducts annual joint military exercises with the US Pentagon. You can’t have it both ways, even if talking hippy makes militarism sound cool. A bloated military budget would certainly explain why they can’t address child homelessness. So would the growing number of billionaires & millionaires which seem to multiply like locusts as poverty increases.

The US, UK, & European Union are important “trading partners” for Bangladesh–that is, if you consider extracting wealth off the backs of working people & children a partnership rather than plunder.
The wretched spectacle of millions of homeless children is only hopeless if we don’t get off our leaden asses to oppose US & European predation in the “developing countries” & militarism wherever it rears its ugly ass.