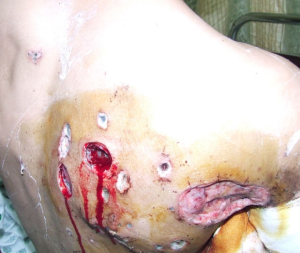 US-led coalition forces bombing civilians in Mosul, Iraq & Raqqa, Syria are being accused of using white phosphorous. It wouldn’t be the first time despite international law banning its use against civilians.

It has been used by the US in Iraq, Afghanistan, Syria; by Israel in Lebanon & Gaza; by Russia in Syria & the Ukraine; by the Saudi-led coalition in Yemen.

The only principled demand for the antiwar movement is the immediate, unconditional withdrawal of all US, Russian, & foreign military forces from Syria, Iraq, Afghanistan, Yemen, Somalia, Libya. Out now! No to war!

Photo is affects of white phosphorous on human skin.