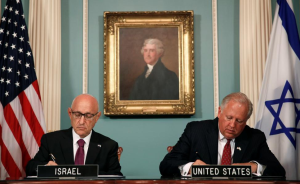 These two jamokes are a US State Department official & the Israeli National Security Advisor at the signing ceremony handing over $38 billion in military aid over the next ten years to Israel. The US called it the biggest package of military aid in US history.

About $5 billion of that largesse is for a missile defense system to detect, track, intercept, & destroy attacking missiles. Isn’t Israel’s vaunted Iron Dome anti-missile system working? Or is that the cost of maintenance on it? Can US tax payers get some reliable evidence from the State Department that mortars & rockets from Gaza are getting past the Iron Dome system & are actually a peril to Israel? Because we really begrudge taking money from the food stamp program, education, Medicare, & Social Security to bankroll a country that has its own armaments industry.

One of the conditions in the new agreement is that Israel can no longer spend a quarter of US military aid on buying weaponry from its own manufacturers but must spend the full amount on US-made weaponry.

There are over 150 Israeli companies producing armaments & weapons systems with annual revenues in the several billions. Their weapons industry is the 6th largest arms exporter in the world. Most of Israel’s fighter jets, used to bomb Gaza, are obtained from the US. But Israeli weapons factories produce ammunition, a wide range of rifles & submachine guns, tanks, unmanned aerial vehicles (drones) & is in fact the world’s biggest exporter of drones.

Israel sells weapons systems to regimes with notorious human rights records like South Africa during apartheid; Guatemala during the civil war/genocide where an estimated 200,000 people were murdered or disappeared; Iran during the reign of the Shah; El Salvador for its death squads; India to use against Kashmiris & its own dissidents; & several other repressive regimes including Ethiopia, Columbia, Mexico, Turkey, Chile, & South Sudan. Of all these regimes, India is Israel’s largest arms market.

No US military aid to Israel.