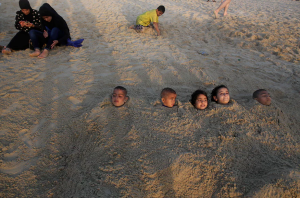 Just when you think you’re inured to the cynical photojournalist coverage of Palestinians by the Guardian-UK, the editors outdo themselves. It’s now impossible to distinguish their coverage from the rubbish coming out of the Israeli propaganda ministry.

A lot of the coverage shows Israeli & “Israeli-Arab” children partying & on outings together to showcase the multiculturalism of Israel. Wouldn’t such a political campaign begin by calling the children by their proper & preferred name–which is Palestinian? Wouldn’t it include ending rampant discrimination against all Palestinian residents of Israel?

Israel & several Zionist organizations around the world trying to present a sanitized image of Israeli apartheid focus on these so-called multicultural programs for children. There’s a lot of bogus money invested in them solely for propaganda purposes.

The caption to this photo said “Muslim Israeli-Arab children play on the beach in Tel Aviv during the three-day Eid al-Adha holiday.” For Palestinians & their supporters, the image of Palestinian kids at the beach evokes the memory of July 16th, 2014 when Israeli bombers killed four little boys playing on the beach in Gaza City. Israel, with its high-tech electronic aerial systems said they thought the boys were “Hamas terrorist operatives.” But of course now we know that Israel targeted children during that entire 7-week carpet bombing siege of Gaza.