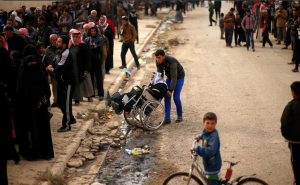 February 2016: a US Defense Department official reported the number of ISIS fighters in Iraq & Syria to be between 20,000 & 25,000. It’s not clear if that included the 5,000 ISIS fighters they estimated were in Libya.

December 8, 2016: a senior US Pentagon official claimed that about 50,000 ISIS fighters had been killed since the US went after them militarily just over two years ago. He called that a “conservative estimate” of ISIS fatalities.

According to official US estimates, that means they’ve killed double the number of existing ISIS fighters. Do you think “fake news” may be involved? Like the “fake news” in 2003 that Saddam Hussain harbored weapons of mass destruction?

The US Defense Department reported in January 2016 that fighting ISIS with ground troops & airpower costs US taxpayers about $11 million per day. The air war alone cost about $5.5 billion total since it began in August 2014 until January 2016. With that kind of expenditure–which is also probably a ‘conservative estimate’–US taxpayers deserve an honest accounting–which will not be forthcoming since the first casualty of war is truth.

Photo is a scene yesterday from the siege against 5,000 to 8,000 ISIS fighters in Mosul, Iraq by US & Iraqi forces. Iraqis are waiting to receive aid from a UN agency.