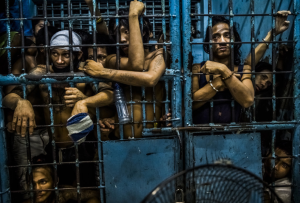 What looks like an 18th century debtor’s prison is a police station in modern day Manila, Philippines where those arrested for alleged drug use are packed like sardines in squalid conditions & take turns sleeping in any space they can find.

Since July 1st, over 35,600 people have been arrested in anti-drug operations or just picked up off the streets. Those are the ones who survived vigilante squads & weren’t shot outright like nearly 5,000 others. Officials claim over 727,600 drug users & 56,500 drug peddlers have surrendered rather than risk being gunned down.

The problem is not just insufficient detention centers to hold them but the complete denial of due process. How long will they be held in these prisons & warehoused like animals? Do they face the possibility of forced disappearance or summary execution? Whether they surrendered or were arrested, they have a right to an attorney & to defend themselves in court. More importantly, they have a right to demand rehab treatment & facilities if they are addicted to drugs rather than incarceration. Mass addiction is a health & social issue, not a criminal matter.

Duterte’s war on drugs is modeled on the US version–neither of which address mass drug addiction. Nor are they intended to. In the Philippines, it is a war on poor youth; in the US, it has the added dimension of racism. The intention behind both is to terrorize young people to forestall any organized resistance to oppression & inequality, to homelessness & unemployment.

Those who stand for justice stand with these young inmates. They are ours. Duterte is the criminal & should be prosecuted for human rights crimes on a massive scale.