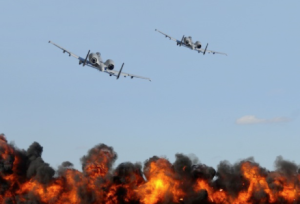 The most debilitating weakness of international political opposition to Assad’s dictatorship, to the Syrian, Russian, Iranian coalition & US coalition intervention in Syria is misunderstanding what the US coalition is doing there. Militarily, it’s a very complicated war that most trained military strategists cannot unravel because there are several aerial & ground forces, including over a thousand paramilitary groups. Militarily, it’s an extremely dangerous & reckless operation with the unified purpose of destroying a popular revolution. It is the very essence of folly to believe the US is simply blundering in its Syria policies or playing high-stakes diplomatic maneuvers by not taking on Syria, Russia, & Iran to defend the Syrian revolution. That kind of naiveté about the character of US militarism & about its mission in Syria boggles the rational mind–especially after what they just did to Mosul & Raqqa & after dropping the Mother of All Bombs in Afghanistan.

There is no such thing as a humanitarian intervention coming from the US Pentagon. Those who promote such a delusion are not treading new military or theoretical ground but turning over old manure in the hopes they’ll find a pot of gold. To demand such a thing after the US has dropped hundreds of thousands of bombs & missiles on civilians is not just magical thinking but treachery toward the people of Syria, Iraq, Afghanistan, Yemen, Libya.

Photo of US bombers is not what a freedom struggle looks like.