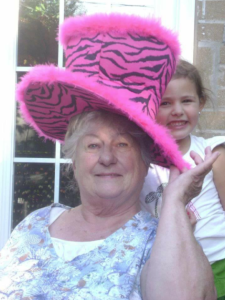 Jacqueline Daley’s daughter Kim Daley-Mascoll notified me that her mom passed away yesterday in Toronto where she lived. She would have been 83 this coming July. Jacqueline & I have been friends since 2013 when we met because of our common commitment to justice & human rights. But our affinities were personal as well as political. We were both working class girls from the Catholic tradition with all that represents emotionally & psychologically. Jacqueline told me she was shy about entering discussions on my wall because she wasn’t as well-schooled as others. Well-schooled isn’t something that necessarily helps one understand oppression. She had a keen eye for injustice & an intolerance for it & was particularly outraged by the conditions of sweatshop workers. Over the years, she commented on many issues, including war, persecution, inequality, immigrant & refugee rights.

In the past few years she suffered health problems, including the loss of her vision, so that she couldn’t be active in discussions. Some may recall we were going to get her a special computer for the sight-impaired but she declined it, knowing her vision & health were failing.

I loved Jacqueline for her kindness, her modesty & lack of pretension, her uncompromising ability to see even the most oppressed as equals, her unwillingness & inability to put herself above others. She was a glorious soul, a marvelous person. My deepest condolences to Kim & to the rest of her family. May dear Jacqueline Rest In Peace.