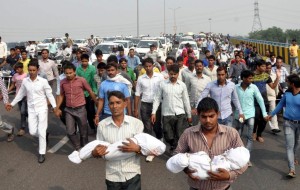 Is incoherence & inconsistency in media only a problem when they report on violence against the oppressed? This photo is family members carrying the bodies of a 2½-year-old toddler & 9-month-old baby who were burned to death in an arson attack in Faridabad near New Delhi, India. Both were of the Dalit caste & the accused arsonists from the upper-caste Rajput community. Their mother Rekha Kumar suffered serious burn injuries as did their father Jitender Kumar while trying to save his family.

Some media reports say the arson & murders were caused by a dispute over a cell phone–the description of which is entirely mangled. Other accounts say it was an act of vengeance for the murder of three Rajputs by Dalits last year. Jitender Kumar, the victim, claimed it was due to Rajput resentment over the election of a Dalit as the sarpanch (head) of the village. The Rajputs said an “internal family feud” led to the attack. Shouldn’t media try to figure out which version is actually true? They could begin by asking why the Kumar family had police security stationed at their home & why that security detail was not present when the torching took place.

Officials in the state “reacted cautiously to the possibility of a caste angle behind the attack.” One state official insisted the torching was because of a rivalry between two families & couldn’t be termed a clash between two castes. What’s with the timidity when the area has a history of violence against Dalits by the Rajput, Jat, & Ror upper-caste communities? Dalits are about a quarter of the state’s population but are most often on the receiving end of brutal attacks.

Some of the more egregious incidents include the 2011 torching of 15 Dalit houses by upper-caste Jats; the victims were forced to flee for their lives. A physically disabled girl & her father were burned to death. In 2013 a mob of 500 people from the upper-caste Ror community attacked Dalits to protest an intercaste marriage between a Dalit man & a Ror woman. The couple was forced to seek police protection & 200 Dalit families were forced to leave the area to escape death. Some of the Ror men allegedly harassed & molested Dalit women & girls & vandalized Dalit property. So once again, why the timidity in suspecting caste violence rather than a damn cell phone?

Former Indian army chief & minister of state for external affairs, General VK Singh would strongly suggest “the possibility of a caste angle” when he hatefully said about the death of the two children that ‘the central government cannot be held responsible if someone stones a dog’.

Our fullest solidarity with the Dalits of Faridabad & all of India in their struggle to end the oppressive & violent caste system. May the two babies Rest In Peace.