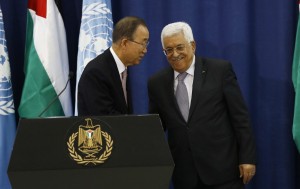 After exposés about the UN role in Haiti, the DR Congo, & in Gaza, nothing lowdown surprises us about the character of the UN. All that world peace talk just so much baloney. In a flurry of diplomatic grandstanding, UN Secretary-General Ban Ki-moon met yesterday with Netanyahu in Jerusalem & then dashed off to hold a press conference with Mahmoud Abbas in Ramallah.

At the press conference Ban denounced “hateful discourse” on both sides & said Israel’s response to Palestinian knife attacks added to the “already difficult challenges of restoring calm” & building a two-state solution. Like Abbas before him, Ban warned of the dangers of the conflict escalating into a religious war. Sounding like a Presbyterian minister who just landed from Mars, he “urged Palestinians to stop knife attacks & violent protests” & asked Israel to stop demolishing homes & erecting walls. Since when did protests demanding the end of occupation, civil liberties, & that Israel stop demolishing whole villages become “violent”? Just because Palestinians are the ones marching?

Are Ban & Abbas really that stupid or is that the kind of nonsense you talk when you’re running interference for Israel & US interests in the region & trying to pretend you’re a disinterested diplomat brokering peace? Or the president of Palestine when you haven’t been elected?

In discussions with Abbas, Ban said he was deeply concerned about “repeated provocations at the holy sites in Jerusalem which have fueled the current outbreak of violence.” Why the hell is he talking to Abbas about that? Why isn’t he screaming bloody murder to Netanyahu about Israel’s military siege of Al-Aqsa mosque?

Ban also expressed concern about statements from Hamas & Islamic Jihad praising “such heinous attacks” with inflammatory rhetoric. “Such heinous attacks” presumably means the alleged stabbings by Palestinians. So why’s he talking to Abbas about it? More importantly, why isn’t he raising hell about Israel’s occupation of Palestine; the blockade & repeated bombing attacks on Gaza; the calls by Israel for vigilante terrorism by its civilians; the military occupation of the Noble Sanctuary; Israel refusing to return the bodies of Palestinians they shot down to their families for burial; demolishing Palestinian homes; & martial law & new apartheid walls in East Jerusalem? What’s more heinous–defending yourself with a slingshot & knife or attacking unarmed people with tanks, bulldozers, tear gas, grenades, & AK-47s?

The role Israel plays as a military fortress against democracy in the Middle East & in maintaining US economic & political control means they’re pulling out the big guns militarily & for propaganda. Our man Ban & his cohort Abbas are there to serve Israel, not world peace, & they should both be escorted out of the West Bank on a rail.

There’s only one way to counter all this melodramatic rubbish & that is to build the economic, cultural, & academic boycott of Israel & continue to hold rallies demanding no aid of any kind to apartheid Israel, end the occupation, lift the blockade of Gaza.