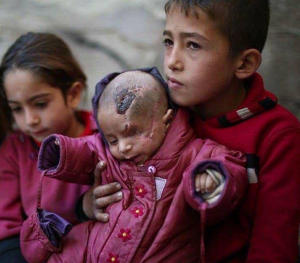 This is another photo of baby Karim whose mother was killed & family home destroyed by Syrian bombing of eastern Ghouta near Damascus on October 29th, 2017. The infant, who is about three-months-old now, lost his eye & sustained a broken skull in the bombing. He’s being cared for by his grieving father, sister & older brother who is 11-years-old.

When he’s grown, his father can explain to him that losing his mother as an infant & being disfigured & disabled was for the greater good of national sovereignty for Assad’s dictatorship, so Assad can continue to imprison, torture, & hang political prisoners, forcibly disappear dissidents, & carpet bomb civilians.