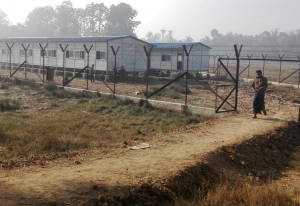 The Bangladeshi government announced that the forcible deportation of Rohingya refugees has been postponed. It was scheduled to begin two days ago but unlike past forced repatriations of Rohingya refugees, this one is under critical international scrutiny. They can’t withhold food from refugees to force them to return, as they’ve done in the past. Certainly the protests of Rohingya refugees against deportations are playing a central role because of the wide coverage in media, mostly social media.

The UN is barred from monitoring the deportation situation, even in its wimpy-assed way, & humanitarian organizations will be barred from entering Arakan state to provide aid & monitor human rights. It must be said that the protests of NGOs at forcible deportation are nowhere near the velocity & scale required for such monumental human rights criminality & violation of refugee rights. According to a report yesterday, the Burmese army & vigilante death squads are still torching villages in the killing fields of Burma & refugees are still streaming across the border.

The Burmese ministry of Social Welfare, Relief, & Resettlement, a cabinet position in Suu Kyi’s government, is overseeing the construction of concentration camps outside Maungdaw in Arakan state. They report they have only constructed barracks for 30,000 of the 655,000 to 800,000 they plan to deport over the next two years. Will they have health facilities, unlike the concentration camps set up after the 2012 offensive? Is there a sanitation infrastructure–because from photos of the new camps, it sure as hell doesn’t look like it? Is it really necessary to surround the camps with enforced wire fences topped with razor wire?

Stand with the Rohingya people in demanding no forced deportation & for full refugee rights in whichever country they choose for asylum.

(Photo of concentration camp outside Maungdaw from Reuters)