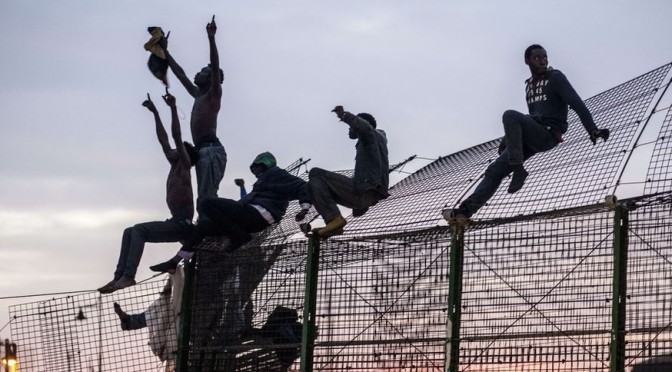 Melilla is a Spanish territory on the Mediterranean coast of Africa surrounded by Morocco. It has long been disputed territory between Spain & Morocco, along with the enclave of Ceuta & several nearby Mediterranean islands. Spain has claimed it since the 15th century & it remains a vestige of European colonialism. Ironic that, since now it serves Spain as a military outpost against African immigrants fleeing the ravages of neoliberal plunder in their own countries.

Reportedly, the Spanish government estimates there are 40,000 African immigrants in Morocco trying to get into Melilla or the enclave of Ceuta which is closer to the Strait of Gibraltar. They estimate another 40,000 moving from Mauritania to Morocco to make entry into Spain & the rest of Europe to find work.

The border between Morocco & Melilla is secured by a six-meter (nearly 20 feet) high chain-link fence with detection wires, tear gas dispensers, radar, day/night vision cameras, & lots of armed border patrol agents. That hasn’t deterred immigrants from repeatedly attempting to cross into the enclave where there is an overcrowded migrant center.

The barbarisms Spain uses to thwart immigrants have created a furor, especially since last February when fifteen immigrants drowned trying to swim from Morocco past a retaining wall into Ceuta. Spanish police fired rubber bullets at them although they claim they were not directly aimed at the immigrants. You don’t find a more paltry defense of barbarism than that. Who were they shooting at then? Fish?

In late March, under early morning cover of dense fog, about 800 young men reportedly mostly from Mali & Cameroon, rushed a weak section of the chain-link fence at Melilla; 500 made it in. It was the single largest crossing since October 2005 when 350 successfully crossed. The young immigrants ran toward the holding center shouting “bosa, bosa” (“victory, victory”) & we join that rally cry with them. Spanish officials claim most were turned back by phalanxes of border patrol from both Morocco & Spain.

European Union immigration policy is barbaric & racist & must be opposed. Immigration is a human right! Open the damn borders!