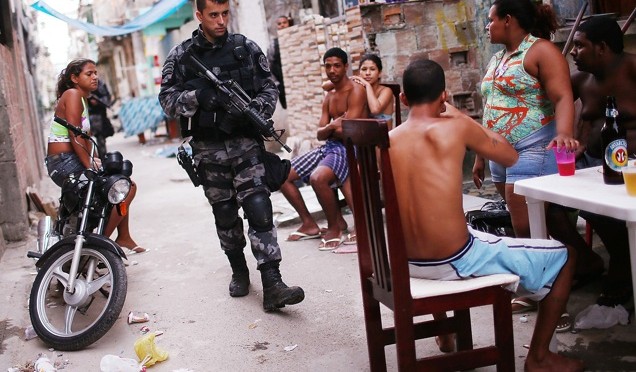 Military special forces in Rio de Janeiro have now taken over at least 38 favelas, mostly those near the venues for the 2014 World Cup scheduled to begin in June. This favela, Complexo da Mare, was slated for “pacification”–that is, military occupation–as far back as 2011 but it is a primary target now since it’s located near Rio’s international airport where hundreds of thousands of tourists will be pouring in for the games.

The ostensible reason for the occupation is to rout drug trafficking but many traffickers on the run claim half their monthly proceeds go to buying off the police. If drug trafficking in the rest of the world is any indication, the police are not just accepting bribes to look the other way but helping to organize the trade. There were so many corruption accusations made during “pacification” of other favelas that officials banned cops carrying backpacks & began teaching ethics courses in the police academy. The officials most likely have special six-wheelers carting in the drugs & carting out their cut of the dough.

This photo in Complexo da Mare lets us judge for ourselves whether the military invasion is a “pacification” or an occupation.