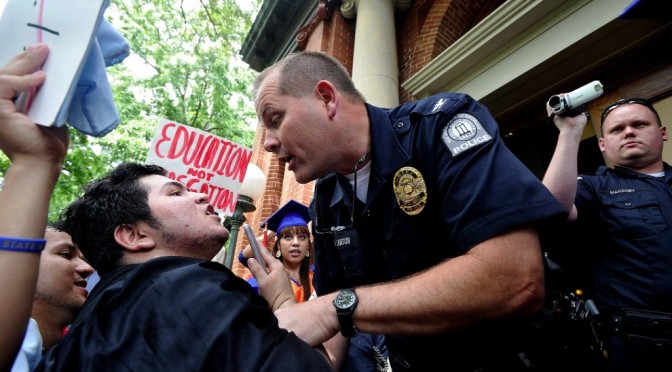 Nothing will give you a massive headache faster than trying to unravel the chicaneries & congressional misfortunes of the US DREAM Act giving conditional residence to undocumented immigrants who arrived in the US as children with their parents. And when you add Obama’s election year stunt of the Deferred Action for Childhood Arrivals (DACA), you’re working toward a nervous breakdown.

The DREAM Act has never made it out of congress; DACA is a con game. It’s a deferred deportation program where you register your name & address with the federal government so they know where to pick you up when the deference ends. It gives all immigration agencies “prosecutorial discretion” toward those who came to the US as kids but doesn’t define the limits of that discretion–which means these agencies can continue to go hog-wild, just as several states have. Arizona, Texas, & other states have taken discretion to mean non-compliance & continue to deny driver’s licenses, financial assistance for college, food stamps, & other public benefits like Medicaid to the undocumented.

A striking & promising development in many countries, including the US, is that undocumented immigrants are risking deportation by public opposition to denial of immigration rights. In 2010, the Georgia Board of Regents governing universities in the state ruled that undocumented immigrants were barred from the top five public universities & would be required to pay out-of-state tuition at all other schools. Out-of-state tuition is three or four times in-state tuition, which is hefty to begin with. One of the lesser-recognized advantages of educational segregation is that it narrows the competition, which is the nature of higher education under capitalism. It makes the privileged look real smart when you eliminate thousands of people.

Undocumented students in Georgia didn’t take all this sitting down & crying in their beer. They’ve had repeated protests since 2010 & when you consider that “prosecutorial discretion” thing, you understand how courageous their political opposition really is.

This protest of undocumented immigrants (on Monday, the 28th) is at the University of Georgia in Athens, one of the schools denying access to the undocumented. The bully-boy police chief is going after Alejandro Galeana Salinas, who seems to be standing his ground without flinching. Notice the cop in the background who is not taking selfies but recording the participants for the future exercise of “prosecutorial discretion.”