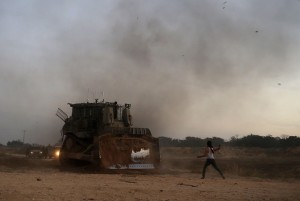 We expected the caption to this photo to read: ‘Palestinian terrorist charges Israeli bulldozer with knife” but that must have seemed a little over the top even to the Guardian-UK. Yahoo might still try to pull it off.

What the caption does say is that the activist is running toward the bulldozer when the dust cloud clearly shows the damn thing is moving against him. That doesn’t require a dust pattern expert to detect. It describes this encounter as coming after the activist & fellow protesters tore down a section of the apartheid fence between Israel & Gaza. In one of its peculiar non sequiturs (trying to pack as many lies into one caption as it can), it says Israel has set up more military checkpoints in occupied East Jerusalem. Those alleged stabbers have the city on edge. And military occupation is calming who?

Along with the widespread military pogrom against Palestinians, there is a media onslaught to regain control of the narrative about Palestinians & apartheid Israel. BDS has made such significant inroads in the past ten years that over a million people marched in solidarity with Gaza during Israel’s carpet bombing siege in summer 2014 & tens of thousands are protesting now. Social media brings the Palestinian victims of Israeli ethnic cleansing up close & personal to millions.

This is a direct threat to the Israeli colonial project & must be forcefully countered because the military fortress called Israel is a lynchpin for US hegemony in the Middle East & in warding off democracy in the feudal & military regimes of the region. Mighty military & political forces stand arrayed against Palestinians.

So we can expect media to go whole-hog peddling Israeli propaganda as though it were the gospel truth. Media will overplay the drama, whipping up pro-Israel hysteria. There is no need to panic or be daunted because there’s nothing new about that. That’s what Palestinians have been up against for 67 years & it never stopped their resistance. It only means we need to be more assertive, creative, & consistent in building the boycott of Israel & active solidarity with Palestinians. Against the forces of tyranny, we array the international forces of solidarity.

Stand firm with the Palestinians & build the economic, cultural, & academic boycott of Israel & demand no aid of any kind to apartheid Israel.