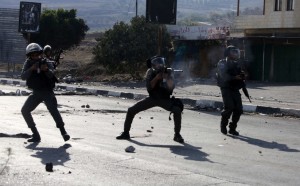 The Israeli rampage against Palestinians, which began with the siege of Al-Aqsa mosque, is a turning point in the Palestinian struggle for justice. The pogrom escalates ethnic cleansing of Palestinians & strengthens military occupation of East Jerusalem while holding the destruction of BDS & international solidarity in the crosshairs.

Netanyahu adamantly denies Israel is trying to destroy or ‘change the status quo’ at Al-Aqsa mosque & actually has the effrontery to accuse Palestinians of inciting violence at the mosque. Media operates as the Greek chorus for Israeli propaganda & peddles this rubbish as the gospel truth.

Israel has in fact instituted several new repressive measures that directly change the status quo at Al-Aqsa. For months, men under 50 years-old were denied freedom of religion & could not pray in the mosque but had to kneel in the public streets; Israeli soldiers militarily occupied the Noble Sanctuary compound where the mosque is & ushered extremist vandals into the mosque for “touring.” These were violations not only of the agreement between Israel & the Jordanian trust governing the mosque but a denial of religious freedom to Palestinians.

Now, East Jerusalem, where the mosque is located, is under martial law & on lockdown. That means Palestinians from the West Bank won’t be allowed to enter the area in order to worship at the mosque. Israel also built a 15-foot wall between Palestinian neighborhoods in East Jerusalem & newly constructed Zionist settlements; Palestinians will have to show identification to leave their own neighborhoods. There are hundreds of Israeli police prowling the streets hunting down Palestinians & dozens of new military checkpoints. For media to parrot Netanyahu that these are not ‘changes to the status quo’ at Al-Aqsa is to mock the intelligence of the public.

Certainly one of the most despicable & dangerous of the new repressive measures is Israel’s decision that the bodies of alleged Palestinian assailants shot dead by Israeli forces will be buried in secret & will no longer be returned to their families for burial. Consider the possibilities for Israeli criminality! For summarily executing unarmed Palestinians; for leaving no forensic evidence of what actually happened; for depriving families of the right to mourn & honor their own.

These are Israeli soldiers in the occupied West Bank directing fire at unarmed Palestinian protesters. The caption to this photo read “Jews armed themselves with everything from guns to broomsticks, rattled by a wave of Palestinian attacks that have shaken the country.” The cynicism of that caption appalls. What’s with the broomsticks when Netanyahu is urging them to arm themselves & when they’re backed up with firepower from one of the best armed militaries in the world?

This is no time to be daunted. Build the economic, cultural, & academic boycott of Israel & demand no aid of any kind to apartheid Israel. To stand in solidarity with Palestinians, international solidarity will have to double down in our activities. We have an immense task to counter media lies.