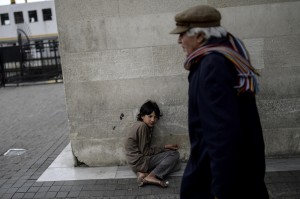 The same situation prevails on other immigration routes. On the Zimbabwe to South Africa route, 20 percent of undocumented immigrants are unaccompanied children. As in the US, those apprehended are kept in detention centers or deported. There are no reliable estimates of the percentage or numbers of unaccompanied children coming from the Middle East & war zones like Syria, Iraq, & Afghanistan except the observation that they are coming by the thousands & seeking asylum. These are not trafficked children, which is another very serious problem, but they do face extreme abuse & violence along the way.

The UN & refugee agencies have parsed immigration status into categories of legitimacy from those seeking asylum from war & civil conflict to “economic immigrants.” This malignant legal conceit is a way to exclude tens of thousands from sanctuary. But these legal maneuvers are falling apart & proving useless in the face of US-NATO wars & military interventions. How the hell can you tell an Afghan adolescent he has to be deported since he’s only an economic immigrant because US-NATO have emancipated Afghanistan? Women even have a nail salon there now. And there’s work in the brick factories & coal mines for kids.

If anyone fits the definition of asylum seekers it would be children & anyone coming from a war zone. But to show just how little authority those legal parsings have, the European Union (EU) & its naval goon squad Frontex pay no heed whatsoever & let everybody drown or deport those who don’t.

This Syrian child, who surely fits the image of the “wretched of the earth,” is begging on the street of Istanbul. He’s an adolescent, not yet a teen, & the EU doesn’t see this as a massive humanitarian crisis but rather as a policing problem!? The horrific accidents of the past several days are exposing the EU & Frontex as utterly barbaric & rotten to the core.

Immigration is a human right! Sanctuary is an ancient commitment of civilized people. If the EU isn’t up to it, then it’s time to take them down. Nothing trumps human rights. An injury to one of our little brothers & sisters is an injury to all.