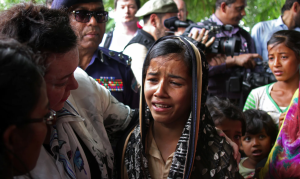 The UN Security Council (UNSC) delegation to Burma & Bangladesh, with a brief photo op foray into Rohingya refugee camps, proved to be an absolute disgrace. No one with half a brain would have expected much because at the height of the current genocidal assault the UNSC issued only one statement on the Rohingya genocide. Their November 2017 statement began with a condemnation of ARSA (irregular forces who were the only defense unarmed Rohingya had against military & nationalist death squads) & expressed “grave concern” over human rights abuses in Arakan/Rakhine state, “including by the Myanmar security forces” (they did not mention nationalist death squads armed by the military). The statement went downhill from there. Rather than calling out the apartheid system imposed on the Rohingya people or condemning the Burmese genocidaires, the statement suggested the conflict was communal conflict between Buddhists & Muslims (the communal conflict narrative masks the power relations between nationalist death squads armed by & operating with the military). They ended the shameful document by promoting the repatriation agreement signed between Burma & Bangladesh in October 2017 at the height of the genocidal onslaught.

The usual explanation for the refusal of the UNSC to act by imposing an arms embargo & other sanctions on Burma was that China & Russia, who both arm the genocide & have vested economic interests in Burma, would use their veto powers. But this delegation showed that the corruption of the UNSC is integral to the organization because UNSC member nations are on the side of the genocidaires, not the Rohingya people. This genocide has been going on for several years, has been well documented by these governments since 1988 & in media for the past six years. The UNSC knows damn well what is going on in Arakan state. The only reason for this so-called fact-finding trip is to slap some life back into the moribund repatriation agreement which would forcibly repatriate Rohingya refugees back to Burma. It’s big power politics that will not recognize the Rohingya people have a human & democratic right to make all decisions about their fate & about if, when, & under what conditions they will return to Burma. To sanction those perpetrating genocide to control Rohingya fate is a political abomination.

The coup de grâce of this delegation was that when visiting Burma, Irrawaddy news, a pro-genocide Burmese news source, reported that UNSC officials avoided calling the Rohingya people by their proper name & only referred to them as refugees so as not to offend the genocidaires. This goes way beyond shameful to complicity. Even the pope couldn’t get away with that kind of crap. Asked about the role of China & Russia on the UNSC, representatives defended them, ignoring the fact known to the whole world that Russia & China arm the genocide. They completed their dog & pony show by calling for an investigation of human rights abuses–being careful not to use the terms ethnic cleansing, apartheid, or genocide–& proposed that the Burmese genocidaires do the investigation. How despicable can you get?

It is the Rohingya people alone who have the right to determine their fate & they have laid out the conditions for their return to Burma. We cannot allow the UN to silence their voices & allow the genocidaires to speak for them.

Photo is Karen Pierce, the UK representative on the UNSC delegation doing her compassion schtick, using a 12-year-old Rohingya refugee girl in Cox’s Bazar as a prop. It was compassionate Pierce who dared not utter the name Rohingya & later spoke for Burma investigating its own genocide.