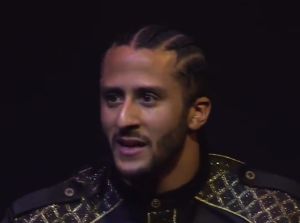 Amnesty has given their Ambassador of Conscience award, their highest award, to Colin Kaepernick for his resolute stand against racism. Even if you’re not much for honorifics unless they serve justice, most people are delighted for Kaepernick because he jeopardized a multi-million dollar career. Such commitment is seldom seen. Though most people who put their lives on the line or who have given their lives for freedom don’t receive any such honors.

Micheal Clinton, an Irish human rights activist & a representative to the European Rohingya Council, now calls on Amnesty to revoke their 2009 Ambassador of Conscience award to Aung San Suu Kyi presented to her by Bono in Dublin in 2012 when she was traveling around the world to pick up a warehouse of awards, including the Nobel Peace Prize, in the midst of a genocidal siege against the Rohingya people. As long as Amnesty doesn’t pull the honorific from Suu Kyi, it’s as discredited as the Nobel Peace Prize for war criminals. Colin Kaepernick, but mostly the Rohingya people, don’t deserve that.

(Photo is screenshot of Kaepernick from Amnesty video of award ceremony)