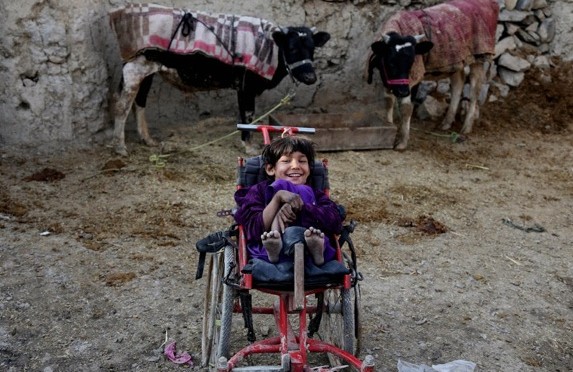 This little Afghan girl is ten-year-old Dil Roba. The media caption says she “sits on her wheelchair at her temporary home on the outskirts of Kabul”–as if her family is renting a winter cottage for a holiday or waiting for their new home to complete construction instead of living in squalid conditions & makeshift shelter because their home was bombed to smithereens by US-NATO forces.

The UN Assistance Mission for Afghanistan (UNAMA), one of the countless UN agencies that issues countless reports with out indicting the war, just reported civilian casualties in the war increased by 14% in 2013 to a total of 2,959 deaths & 5,656 injuries since they began documenting them only in 2009. The number of children killed (561 kids) & wounded (1,195 kids) jumped by 34%. Why the UN waited so long to account for civilian deaths in this war is something only they can justify since there is no valid explanation. The figures should be considered an approximation & nowhere near the actual loss since much of the bombing is done in remote parts of Afghanistan where the UN does not go since there are no luxury hotels there.

The report indicated most casualties were caused by roadside bombs or getting caught in the crossfire of the 962 battles (about 20 per week) between US-NATO forces & the Taliban. According to UNAMA, the onus for increased civilian casualties is on the Taliban for stepping up attacks on US-NATO forces & that judgement was echoed by the US-NATO command, who added that the destruction of mosques, health care facilities, & schools was by the Taliban. They didn’t explain why they started shooting at the Taliban when civilians were obstructing gunfire.

In an ecumenical gesture, the director of human rights for the UN called on ‘all sides to protect civilians from harm’. We call on the director to resign in disgrace & the UN to get the hell out of Afghanistan if they can view the civilian carnage in Afghanistan but still won’t denounce the US-NATO occupation of that country.

The Taliban condemned the UN report as US propaganda & though we find ourselves in little accord with Taliban politics, on this score they are absolutely right.