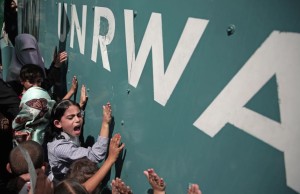 The UN Relief & Works Agency for Palestine Refugees in the Near East (UNRWA) was founded in 1949 to address the crises of refugees created when Zionist paramilitary terrorist groups in league with the US & UK stole most of Palestine & called it Israel. The UNRWA deals only with Palestinian refugees in 58 registered camps in five countries & is distinct from the UN High Commissioner for Refugees (UNHCR) which deals with all other refugees.

UNRWA is funded by voluntary contributions from the UN Secretariat, several governments, & some NGOs. The largest single donors are the US & European Union whose contributions make up nearly 50 percent of the total income. The money is not used to run the refugee camps but to provide health & education services to now 5.5 million refugees unable to return to their homeland whilst Israel recruits Zionist settlers to take their lands. There is increasing political pressure from Zionists & right-wing groups to eliminate UNRWA–which means eliminating health care & education for the refugees.

In a statement issued on July 25th–just one month before school opens–UNRWA announced it was financially strapped to the tune of $101 million “due to lack of funding by international donors” & might have to delay the start of school in 703 overcrowded schools in Palestinian refugee camps across the Middle East, affecting 500,000 students: 50,000 students in the West Bank, nearly 32,000 in Lebanon, 115,000 in Jordan, over 67,000 in Syria, & 225,000 in Gaza. That would also lay off 22,000 teachers.

Since the announcement, parents, teachers, & students in Gaza & in Jordan refugee camps have held rallies at UNRWA headquarters protesting the education cutbacks. One teacher in Gaza told an Al Jazeera reporter it wasn’t possible a big operation like UNRWA would discover the financial crisis just weeks before school opening. Protesters demanded the “international community” immediately come up with the dough because Palestinians should not be forced to give up their right to an education along with their right to return to their homeland.

When we consider the crisis of Palestinian refugees, particularly in Gaza under the Israeli embargo & in Syria under war; when we consider the housing & humanitarian crises in Gaza as a result of Israeli carpet bombing, including the bombing of schools used as UNRWA refugee centers; when we look at the recent UNRWA study showing the infant mortality rate in Gaza has risen for the first time in five decades, then, like the protesters in Gaza, we begin to smell a rat about the cutbacks in UNRWA funding that would force 500,000 children out of school.

Several human rights groups acknowledge that Israel directly targeted children in its murderous bombing siege last summer. Those who are pulling back their funding of UNRWA are proving complicit in that criminality. UNRWA publicly posted the names & amounts of 2014 contributions & we think it politically essential that they publicly identify those contributors who are withholding funds & willfully denying education to 500,000 Palestinian children in refugee camps.

The photo is Palestinian school children in Gaza City protesting outside UNRWA headquarters. Our fullest solidarity with their protests.

Defend Palestinian children & their right to education by building the economic, cultural, & academic boycott of Israel. Demand no military aid to Israel but money for education, health care, & housing.