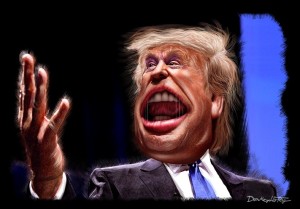 The 2016 US presidential campaign should mark the spot in history when the utter bankruptcy & banality of the two-party system & the corruption & sputtering ineptitude of US politicians was exposed for all the world to see. When Joe Biden is considered as a way to save the Democratic party from Clinton; when Huckabee & Trump, & the other clowns are even offered as options; when Sanders can support Israeli apartheid & talk like Trump on immigration & be considered the choice of radicals; & when serious political people like Scully & Bach are ignored by most radicals & excluded from debates, you know the system is in trouble.

American capitalism has a crisis of leadership that Donald Trump can sputter out the most racist & misogynist rubbish & still be a front contender. We wish that spoke to the latitude of the Bill of Rights rather than the power of social hatred in the US. It’s no longer certain elections aren’t staged every so often simply to make asses & a mockery of the electorate.

After Trump’s vituperations against women garnered such big headlines, he now feels he can pull his head out of his ass & say anything he wants without consequences. Talking to hog farmers in Iowa & assuming them as racist & stupid as himself, he now demands the end of the constitutional right to citizenship for all children born in the United States. Coherence isn’t his strong point; presumably he means denying automatic citizenship to those children born to undocumented immigrants.

When it comes to blowing smoke, Trump is second to none–not even Clinton or Sanders. He promises, if elected, to deport all undocumented immigrants. Obama has been trying to do that & he hasn’t succeeded. And neither would Trump because undocumented immigrants are essential to the US economy. If they were deported, all of agribusiness would collapse since it depends on the super-exploitation of immigrants & their children as farmworkers. The Obama regime assured the super-exploitation when he outlawed any further attempts by the Department of Labor to implement safety & protection laws for small children farmworkers in 2012.

Trump also repeats the vilifying charge that immigrants have an exorbitant crime rate, when studies done by innumerable reputable institutions going back a century prove their crime rate is significantly lower than those native born.

That this fool is even in the running does not speak to democracy of the US electoral system when Scully & Bach are excluded & unable to attain ballot status without hundreds of thousands of dollars. It’s a rigged system; it’s a bought system & hasn’t a damn thing to do with democracy.

Immigration is a human right. Open the damn borders. Deport Donald Trump to an insane asylum in the Arctic region.

(May I add in a personal note that my father was an undocumented immigrant his entire life. His parents born here, homesteaded in Saskatchewan, Canada & had to relinquish US citizenship to take Native American land there. So under Trump’s proposals I should be deported to Canada. This gives me double pleasure to be running against his sorry ass.)

(Caricature of the fool by Don KeyHotez)