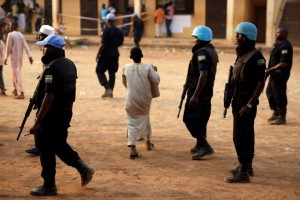 Were it not for the catastrophic role of UN soldiers (called by the euphemism “peacekeepers”) in bringing the cholera epidemic to Haiti after the 2010 earthquake & reports of their sexual misconduct exchanging money, food & medicine for sex from Haitian minors, we would not know very much about how the UN uses its military force.

The UN deploys soldiers around the world second only to US military deployments. They currently have operations in at least 17 places, 10 of them in Africa (Western Sahara, Central African Republic, Mali, Rwanda, Democratic Republic of the Congo, Darfur, Abyei, South Sudan, Ivory Coast, Liberia), & in Syria, Lebanon, Cyprus, Kosovo, Haiti, India, & Pakistan.

There are over 125,000 UN personnel, mostly uniformed but also civilian, serving in those places. UN military operations have a budget of nearly US$8 billion a year. That explains why the UN has so little resources to assist refugees fleeing wars UN soldiers are involved in.

The cholera epidemic struck at least 700,000 Haitians, killed over 9,000, & spread to the Dominican Republic & Cuba. The disease entered Haiti’s water system through improperly managed human waste at a UN military base. It is documented that the UN covered up its responsibility in the early days of the epidemic which delayed life-saving medical intervention & it has refused to accept criminal culpability in compensating those who lost loved ones or were harmed in any way by the epidemic.

Sexual abuse, rape, sex trafficking, & promotion of prostitution charges (in particular child prostitution) exist in every country UN soldiers have ever operated in. Reports & public exposure of sexual violence go back to at least the 1990s in UN operations in Mozambique, Bosnia, Guinea, Liberia & Sierra Leone. But it’s certain they began with the first UN military deployments in 1948. The violent character of prostitution, as an adjunct to the military, puts the lie to the rancid glorification of the flesh trade as “sex work” & to the commodification & reification of women & children’s bodies so au courant among pimps & in certain intellectual circles.

After repeated outcries, in 2003 then UN secretary general Kofi Annan finally issued a special bulletin condemning the decades & thousands of cases of abuses & in 2005 established a “zero tolerance” policy. The crimes in Haiti took place after 2010 & there have also been repeated, serious charges leveled against UN soldiers in DR Congo in the past few years. There are currently new allegations in the Central African Republic of child rape in camps for families displaced by the country’s civil war. There are no reports of any prosecutions or actions by the UN to address the charges.

The more you know about the UN, the more you think it needs to be dismantled.

These are UN soldiers (distinguished by the blue helmet) redeployed from Rwanda to Central African Republic to monitor elections. Soldiers appear to be a fixture at poll booths around the world. What does that tell you about the state of democracy in the world?