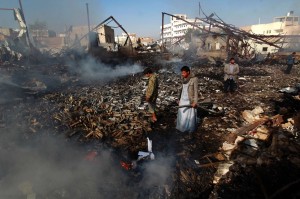 It’s on the one hand a valuable report for its exposures of war crimes by the Saudi coalition & Obama regime, but it’s politically schizophrenic, consistent with HRW politics generally in reporting on war. The problems begin with the designation of “civilian areas.” Of course, HRW means residential areas, schools, hospitals, mosques. But what are legitimate bombing sites in Yemen, according to this designation? Power plants, bridges, highways, agricultural fields? Are those designated “military areas,” as they are by the US, Russian, Israeli bombers when they take out a country?

The CBU-105 Sensor Fuzed cluster bomb is a monstrous weapon but if HRW took a poll of Yemenis about which type of bomb they would rather be killed by, it’s unlikely they would parse the distinctions. It’s true, cluster munitions are indiscriminate; the CBU-105 reportedly has a high failure rate & does not “meet the reliability standard required for US export of the weapons.” That means they don’t explode & like land mines in Afghanistan (& elsewhere) remain a problem after the endless wars end.

Why can’t HRW bring itself to opposing & denouncing these monstrous wars? Why does it have to parse distinctions in weaponry & promote a kinder, gentler form of military savagery? This is where HRW diverges from the antiwar movement which demands not different kinds of weapons for bombing people to death but the immediate, unconditional withdrawal of all military personnel & materiel & brokers no discounts on savagery.

The HRW report is valuable because it exposes war crimes & the countries perpetrating them & because it puts political pressure on the Obama administration. HRW previously protested in a letter to Obama under the aegis of the Cluster Munition Coalition which they are part of & sent a copy of the current report to the US State Department. Good work, but it’s not as if Obama & the State Department don’t know what Saudi Arabian bombers are doing with the cluster bombs sold them by the Pentagon. It’s not as if the US doesn’t know “civilian areas” are being targeted since the US is providing intelligence & logistical support to the Saudi regime.

HRW’s report is valuable but it is politically compromised because it is based on a pipe dream that war can be conducted in a civilized way according to human rights standards when by its very nature it is savagery. The antiwar movement must be rebuilt around the demand for the immediate, unconditional withdrawal of all military forces from Yemen, Syria, Iraq, & everywhere else they are.

This photo taken in Sana’a, Yemen is of a bombed-out sewing workshop where two factory workers were bombed to death. May they RIP.