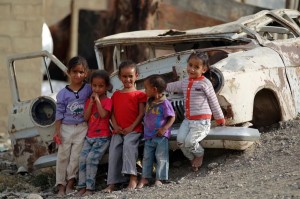 You wouldn’t know from this beguiling photo of children in Sana’a, Yemen that the Saudi-led, US & UK-backed coalition is still bombing Yemen to smithereens. Saudi officials claim they’ve been bombing for over a year now “to bring peace & stability” to Yemen–probably the same reason they behead dissidents in Saudi Arabia.

What is not reported, except as an aside, is that yesterday children demonstrated outside UN offices in Sana’a because on Monday the UN, at the direction of Ban Ki-moon, removed the Saudi-led bombing coalition from a UN child rights blacklist after the Saudi regime complained of its inclusion.

The UN report on children & armed conflict, released last Thursday, claimed the bombing coalition was responsible for 60 percent of child deaths & injuries in Yemen last year (killing 510 & wounding 667) & for half of the attacks on schools & hospitals. Only half? Who else could have done it? Overall, 6,000 civilians have been bombed to death.

Ban Ki-moon, who also disgraced himself in the bombing of Gaza 2014, claims there will be a review of the charges. During that review they will find several reasons to withdraw the allegations.

There is no alternative but to rebuild the international antiwar movement & demand “end the bombing of Yemen.”