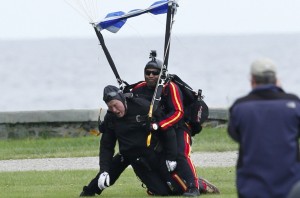 Reposting this from June 16 2014. Before you denounce me for cruelty do remember that satire (what some call a smart mouth) is the genre of the oppressed:
*****

They say you ought not to make fun of dead people but that’s an old saying from feudal days when doing so could get you beheaded. Under capitalism, the practice of pissing & dancing on graves became common. Under neoliberal capitalism, when the world is run by creeps like Henry Kissinger, Omar Suleiman, Ariel Sharon, Augusto Pinochet, the two Clintons, & the mutant clan of Bushes, ridicule is the only thing that sustains in our darkest hours since the courts won’t let us near them to extract justice.

They made a big deal about Bush Sr. skydiving on his 90th birthday. What they didn’t tell us is they strapped his corpse to some military special forces guy who they had to pay big bucks since no one else could tolerate the stench.

The obituary for the old boy has long been written, just waiting for the day of delivery. But judging from the decay evidenced here it’s several months belated.

(Photo by Robert F. Bukaty/AP taken by a long-range zoom lens since Bukaty wasn’t paid to stand the stench)