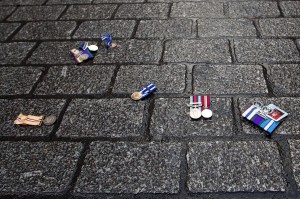 Military veterans play a central & invaluable role in the antiwar movement, not just in the US but in the UK & other countries. The photo is of war service medals discarded by veterans at a recent protest against UK intervention in the Syrian war. The gesture of veterans discarding medals became prominent during protests against the Vietnam War, which was an international movement involving millions.

John Kerry, who rose to prominence grandstanding against the Vietnam War, now shills for US wars as secretary of state. He once publicly claimed on TV that he discarded his several medals at the April 1971 march of over a million people in Washington, DC. Since his political career as a senator in 1984, he began to admit he still has the damn things & only threw out his ribbons. He was always a lying-assed weasel & has the perfect job for his character.

At the UK protest, RAF veteran Daniel Denham said “If you look close enough at these medals, you can see the reflections of dead Iraqis. You can see the embers of Libya. And you can see the faces of the men & women of the British armed forces who didn’t return & also those who did with lost limbs & shattered souls. I no longer require these medals.” Veteran David Smith said he wanted to express “utter disgust” at the unlawful bombing of Syria, & veteran Kirk Sollitt, who served in the Gulf War, said: “By bombing in Syria, we are killing innocent, vulnerable, sentient beings, men, women & children. You cannot sow bloodshed & reap peace. I no longer want these medals.”

Our hats off to these veterans & to the UK antiwar movement.