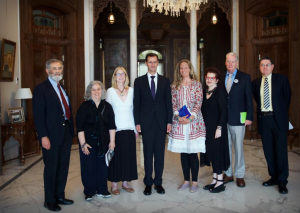 Amnesty International has published “Human Slaughterhouse: Mass Hangings & Extermination At Saydnaya Prison, Syria,” a gruesome 48 page account of all form of torture & of up to 13,000 hangings of Assad’s political opponents in one of his military prisons.

The contrast of investigative rigor shown in Amnesty International’s report to the pathetic sycophancy of the US Peace Council delegation to Syria in July 2016 facilitated by paid Assad propagandists Beeley & Bartlett could not be more damning of the latter. The delegates who on their return spoke at the UN under the aegis of the Syrian ambassador make you cringe at their childlike credulity & willingness to believe whoever Assad’s propagandists stuck in front of them, including mostly government officials, businessmen, industrialists, & the Syrian Eastern Bunny. They swallowed every word they were told & never inquired about Assad’s gulag.

The delegates in this photo fawning during their audience with Assad are from left to right: Henry Lowendorf, Madelyn Hoffman, Judith Bello, Bashar Assad, Vanessa Beeley, Donna Nassor, & two unidentified jamokes. The delegation included Joe Jamison & Gerry Condon, neither of whom looks like these two guys.

If you can stomach listening to 45 minutes of political drivel, this video is members of the delegation reporting their findings at the UN on their return from Syria. Even ten minutes will serve to expose their shameful lack of judgment & investigative rigor in contrast to the Amnesty International report.