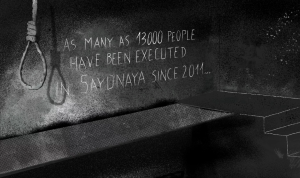 The Amnesty International report published today titled “Human Slaughterhouse: Mass Hangings & Extermination At Saydnaya Prison, Syria” is 48 pages describing unspeakable tortures Syrian dissidents are being subjected to in Assad’s gulag, including the hanging of up to 13,000 dissidents & revolutionists between 2011 & 2015.

This damning exposé explains the pernicious campaign being waged by Assad’s paid coterie of propagandists denouncing Amnesty International as deceitful & biased against Assad. They were preparing their followers not to even read the report.

Amnesty is not a paragon of political virtue; there is often reason to excoriate their judgements including particularly its report on Gaza after the 2014 Israeli carpet bombing offensive. But this report exhibits investigative rigor which Assadists will attempt to discredit. There is a way for the Assad regime to rebut the conclusions of this investigation & that is to comply with Amnesty’s call for allowing independent human rights monitors unrestricted access to Saydnaya & other Syrian prisons.

Do those who support Syrian & Russian bombing of civilians to defend Assad’s national sovereignty (i.e., dictatorial rule) believe these monstrous crimes are politically defensible by anyone other than fascists?

One can download the report from this site in either English or Arabic: 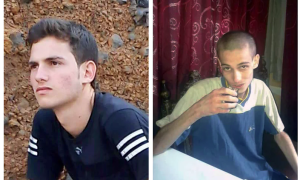 (Before & after photos of detainee at Saydnaya Prison)

(Both photos  from Amnesty)