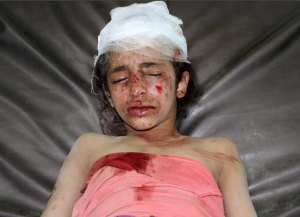 Remind us again why the Saudi coalition, armed & supported by the UK & US, have been bombing Yemen to smithereens for now two years?

Saying it’s to thwart Iran & defeat the Houthis as Iran’s proxy fighting force sounds impressive but it’s more likely to destroy every shred of the powerful Yemen uprising in 2011 which still defies Saudi bombers by marching by the tens of thousands. Otherwise why are they bombing weddings, funerals, homes, schools?

This little girl is the victim of a Saudi bombing strike in the city of Saada, yesterday. What does she have to do with Iran?

End the bombing of Yemen. No military aid to Saudi Arabia & all of the countries involved. UK stop arming the coalition. US get the hell out of the Middle East.