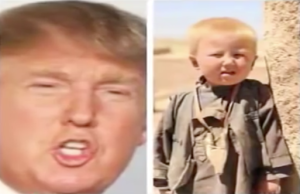 According to a report on Neo News, a Pakistani television network, Donald Trump was born Dawood Ibrahim Khan in the now Taliban-controlled Waziristan region of Pakistan in 1954.

Neo News claimed that after Dawood’s parents were killed in a car accident, a British Indian army officer took him to London where the Trump family later adopted him & brought him to America. That would, of course, make Trump ineligible to be US president.

Neo News appears to have based the story on social media posts which included stories about Dawood’s youth & life in Pakistan. This photo of Dawood in traditional garb shows a likeness to Donald beyond dispute.

Skeptics will question this story with their always tedious & scrupulous demands for proof. The social media community that follows Global Research & Pepe Escobar, hanging on their every conspiracy & crackpot theory, will denounce this story because it conflicts with their new campaign claiming the anti-Trump protests are orchestrated by George Soros to unseat Trump, the candidate of choice for libertarians & other crackpots.

There are however compelling circumstantial factors pointing to the veracity of the story. Trump’s adopted mother was from Scotland. Scotland is not that far from London. And of course there is that head of hair which for so long we thought was bleached. That’s proof enough for Global Research & it should be good enough for the rest of us.

Pakistani Prime Minister Nawaz Sharif, referring to Dawood by his American name, congratulated Trump on his “historic” electoral victory, saying it “is indeed the triumph of the American people & their enduring faith in the ideals of democracy, freedom, human rights & free enterprise.” He was just buttering Trump up (who identifies with none of those ideals; nor do those who elected him) to get more military aid out of him. But of course, Nawaz & Dawood may even be cousins.