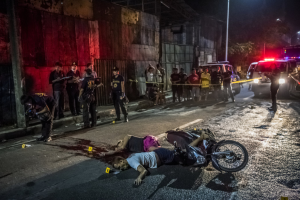 Last week Philippine president Duterte phoned Trump to congratulate him on winning. He reported that Trump wished him success in the war on poor drug addicts & said Duterte is doing it just the right way: shooting down suspected addicts & street peddlers & skipping that whole nuisance of due process thing.

In just over five months, nearly 5,000 suspected users have been shot down in cold blood by death squads incited & organized by Duterte. “They are slaughtering us like animals, one witness told a NY Times reporter.

Since they’re so in sync politically, there’ll probably be a rapprochement now between the two loudmouthed presidents & all that grandstanding & talking trash about kicking out the US military & aligning with China & Russia will soon be forgotten. Especially after Duterte takes up Trump’s invitation to meet with him at the White House next year.

Not all Americans are barbarians who share Trump’s enthusiasm for vigilante death squads. Our deepest condolences to the families of those shot down like animals. They are ours. May they Rest In Peace.
These are two victims murdered by Duterte death squads to the applause of right-wingers around the world.