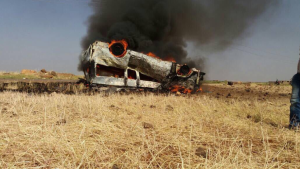 Eight White Helmet rescue workers were killed in Syria last week, buried in rubble like those they attempt to save. Four more were killed this week when their ambulance was hit by an airstrike.

We should take a moment to honor them for putting the lives of others above their own. Our condolences to their families & friends.
May they Rest In Peace.

(Photo is blown up ambulance that killed four, including three medical workers.)