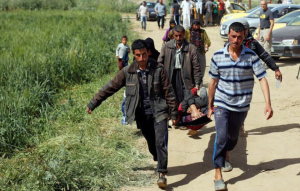 Most photos from the siege of Mosul are akin to the photos of snowy woods & garden plots in Kashmir under occupation. What we get from Mosul are bombed out buildings & abandoned military equipment. But to most of us, the only thing that matters is what is happening to civilians whose city is being bombed & shelled to smithereens in a bombers against urban guerrillas war.

There are elderly, infirm, children, pregnant women, disabled unable to flee without help, those shell-shocked & terrified in need of help.
This is one of the rare images of Iraqis fleeing Mosul. They have to cross the Tigris by canoe since the bridge has been bombed out along with most roads. There are photos like this of men carrying their sick father, others of senior men hobbling on crutches, mothers & fathers carrying children, some of whom are injured. They’re headed for refugee camps where conditions are squalid & likely to be for a considerable period of time.

Our solidarity with them is to demand the US withdraw immediately, unconditionally from Iraq, leaving not a nail nor a bullet in place. ISIS must be stopped but not by bombing hundreds of thousands of civilians & reducing their city & lives to rubble. How to stop ISIS? Stop the weapons pipeline from several countries including the US, Russia, Israel, & other countries.