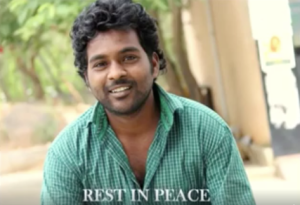 This is reposted from January 20th, 2016, three days after the suicide of Rohith Vemula, a PhD candidate & Dalit civil rights activist in India. The first anniversary of his death is approaching & there will be tributes to his life & to the role he continues to play in inspiring the movement against caste oppression. This is a very powerful trailer to a tribute & documentary about his life:

As a personal aside, January 11th is the 20th anniversary of my brother Paul’s suicide. To me there is resonance between Paul & Rohith because Paul’s psychic energies were exhausted from 40 years of fighting abuse & indignities as a man with learning disabilities.
********
We should take a moment to honor & pay our respects to Rohith Vemula, a 25-year-old graduate student in Hyderabad, India, who committed suicide by hanging last Sunday. Rohith was a Dalit activist who fearlessly fought caste oppression & a socialist student activist involved in protests against the discriminatory beef bans, the death penalty, communal violence against Muslims, & against the growing rightwing, nationalism in Indian politics. He was persecuted by the rightwing university administration & a month ago he & four other Dalit students were evicted from university housing & had their monthly research stipends suspended, allegedly for subversive activities.

According to the powerful tributes of friends & co-thinkers, Rohith was a deep, gentle fellow, a political activist & teacher. Suicide is often a political act common among the oppressed & persecuted who develop a profound sensitivity which can be difficult to sustain & manage. Being thrown out of the university must have evoked in him all the outrage & indignities of caste oppression.

To his survivors, the death of such a beloved & respected man must feel as if the world has shifted on its axis because of his role in the struggle against caste oppression. Even in death, officials feared him & took no chances his death would be commemorated since they kidnapped & burned his body in secret–to efface his memory & obliterate his spirit of defiance. But there have been protests around India & his life & death are being memorialized by thousands.

It should not need to be said that we cannot unfavorably judge someone who takes their own life. The grief & psychic pain such sensitive people feel is so profound that they are able to overcome the human instinct for survival. We are not asked to judge but to understand. In the case of young Rohith, we regret the choice he made in death but honor the choices he made in life to resist human degradation & injustice & spend his life trying to end it.

Our deepest respect to his memory. Our most heartfelt condolences to his family, friends, & co-thinkers. We will remember him around the world as a champion of human rights. May he Rest In Peace.
Photo is Rohith Vemula from his FB wall which the university closed down.