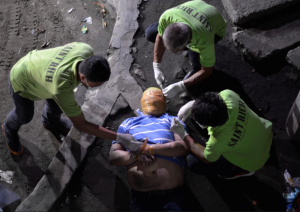 Rodrigo Duterte cultivates an image of himself as vulgar, boorish uncultivated, thuggish & speaks in profanities & debased language. In fact, he comes from an extremely prominent, well educated family. His mother Soledad was college educated in the 1930s & worked as a teacher & school administrator. His father Vicente was a lawyer, mayor, governor of the province of Davao, & served as president Ferdinand Marcos’ Cabinet Secretary in the pre-martial law period that began in 1972.

Duterte himself has a law degree, was a prosecutor in Davao city, was a Philippine congressman for the region, & served as mayor of Davao for 22 years.There are many other politicians in Duterte’s extended family, including uncles, aunts, & his kids who appear to think of the mayoralty of Davao city as a hereditary title.

That Duterte is a thug & a populist demagogue is indisputable. That’s usually taken to mean he appeals to unsophisticated, stupid, lower class workers–the same constituency that many insist is Trump’s social base. That’s very questionable not just in terms of demographics but in terms of political analysis. Historically, there is more evidence that the appeal of these fascistic types is rooted in the middle class who feel their privileges & entitlements are jeopardized–very much the class that Duterte comes from–more than among working people.

Media reports that Duterte’s popularity has grown with the acceleration of his death squad campaign. How reliable those polls are depends entirely on who is paying for them. But part of any actual popularity is due to the mythology he created about his achievements as mayor of Davao. He may be boorish but he is also slick.

His election bombast is that his law & order vigilantism in Davao made it one of the safest cities in the Philippines. His use of extrajudicial killings for drug users & criminals has been tracked by human rights groups back to 1998 & up to 2016. His notoriety for vigilantism got him dubbed “the Punisher” by Time magazine in 2002. Reality doesn’t match his rhetoric.

Reuters, which has done significant investigative work on Duterte, reported in May 2016 that Davao city has the highest murder rate & second highest rape rate among 15 Philippine cities. In 2010, while he was mayor, the Philippine Child Protection Unit reported that Davao was one of the top five areas for child prostitution, sex trafficking, & sex tourism in the Philippines. Again in October of this year, child protection groups reported that child prostitution was rising in Davao due to unemployment.

Funeral workers–those questionably deemed Duterte’s constituency–are here removing duct tape from the head & wrists of a death squad victim in Manila last September. There are other photos where the funeral workers handling the bodies of victims are clearly distraught & overwhelmed. This is a gruesome photo but once again, the indignity of this man’s death does not adhere to the victim but documents & condemns Duterte’s criminality. According to the pattern, two or more vigilantes on motorcycles with no license plates & faces hidden by masks or helmets seal off the streets & hunt down their victims for execution.

That’s the same vigilante model used by the Davao Death Squads which Duterte recently admitted to operating while mayor. Human rights groups have documented 1,400 killings in Davao between 1998 & 2016, some of them teenagers. In 2011, investigators from an organization of the forcibly disappeared & the Commission on Human Rights discovered killing fields near Davao where the death squads dumped their victims. Forensics on the skeletal remains found signs of torture.

While he campaigned for president, he promised to make Manila Bay a killing field by dumping the corpses of criminals there to “fatten all the fish.” In a monstrous political sarcasm, Duterte just publicly admitted he is addicted to Fentanyl, a synthetic opioid similar to morphine but 50 to 100 times more potent. It has side effects, including confusion, anxiety, & hallucinations. They could dump his bony ass in the bay but the fish are unlikely to bite. Better he be prosecuted & jailed, given the due process he scorns for the poor.

May this young man Rest In Peace. Our condolences to his family & friends.