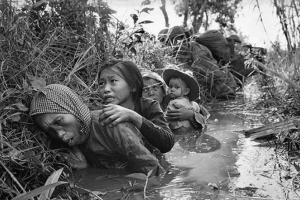 Reposting this as a tribute to photojournalists who play an essential political role in making war, occupation, & genocide up close & personal experiences so that we may understand & stand with the oppressed:
*****
This should be the purpose of photojournalism in war & occupation: to show the experience of civilians. To show what war is really all about. If they do their job right, they will make us hate war.

This photo from January 1966 is Vietnamese civilians being “escorted” by US paratroopers & reportedly taking cover from Viet Cong fire in an area outside Saigon,

How many photojournalist accounts of civilians do you recall from Afghanistan, Iraq, Somalia, Yemen, Syria, Libya, Pakistan? There is very little from over a year of bombing in Yemen, more from Assad’s bombing in Syria, & nothing from Israel’s recent incursion into Gaza.