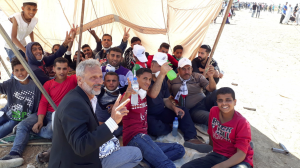 These Palestinian kids (who have to interrupt their childhoods to fight the genocide against them) must be one of those Hamas terrorist cells that politicians & Zionists internationally are blasting for provoking the Israeli military to massacre. You can see terrorist written all over their faces. Otherwise, why would they be smiling? Those Arabs are so sly. That’s only to disguise their nefarious intent to cross the apartheid fence into Israel & annihilate Israelis by tearing out their hearts. Or at least that’s what Zionist bloggers are saying.

Actually, these young boys have come to the Great Return March to demand refugee rights for Palestinians & the end of the brutal military occupation. And in that regard, they are freedom fighters. Not the new generation of freedom fighters because in conditions of genocide, the young don’t have the luxury of childhood.

The best way to stand with Palestinians is to find a rally but even if you cannot, everyone can build & honor the economic boycott of Israel by buying nothing which originates in Israel.