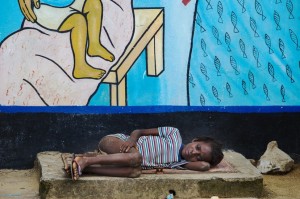 This little girl named Cynthia is waiting for dead bodies to be removed from Redemption Hospital in Monrovia, Liberia so she can be admitted & treated for Ebola. The critical ward of Redemption Hospital, with plastic-covered mattresses shoved against each other on the floor, looks more like a renovated chicken coop than an epidemic treatment center.

Some of the most human & moving images of the epidemic, including the image of 11-year-old Esther Tokpah who was orphaned & this of Cynthia, were taken by Michel du Cille, a renowned photojournalist for the Washington Post. The humanity of his work is reminiscent of Muhammed Muheisen, the photojournalist who powerfully captures Afghan refugee children in Pakistan & also works in other conflict areas.

Michel du Cille died on Thursday while on assignment in Liberia, not from Ebola but from a heart attack. In October, after undergoing a 21-day quarantine for Ebola, he was disinvited from speaking to photojournalist students at Syracuse University in New York. He denounced this hysteria in a Post article. But of course, much of the hysteria has been created in the media, not unlike the early days of HIV.

We should take a moment to honor du Cille for his work helping to humanize the catastrophes of neoliberal healthcare & helping us understand what needs to be done in solidarity.