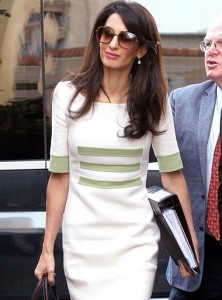 Baba Wawa just released her profile for most fascinating person of 2014: Amal Clooney, spouse of George & former corporate lawyer whose clientele included Enron & Arthur Andersen, the accounting firm that helped Enron cook the books in one of the biggest corporate frauds of the early 21st century. (There’s nearly 100 years left to go; give them time. If we don’t take them out, they’ll easily top it.)

Media describes her as a human rights lawyer but her resume on that is sketchy & only if you agree with the US Supreme Court that corporations are people too. The UN asked her to adjudicate Israeli human rights crimes in Gaza during Operation Ethnic Cleansing but she declined saying her schedule didn’t permit it. Give her credit for avoiding confrontation with her new spouse who war-mongers against Sudan with Rabbi Steve Gutow & Rabbi David Saperstein, the US Ambassador for Religious Freedom, both of whom are outspoken Zionists.

Wawa isn’t known for asking the hard questions. After unseemly fawning & girlish talk of wardrobe, she will query what kind of tree Amal always wanted to be & what George is like in bed. There’ll be some blushing & some tittering but the things that make Amal, not interesting, but a person of interest will be elided.

(Image of Amal Clooney from google)