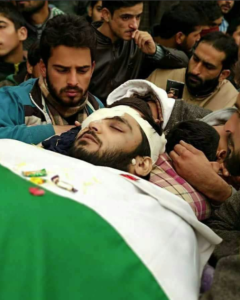 We should take a moment to honor 22-year-old Ashiq Ahmad Bhat who was killed by Indian occupying forces on Monday & buried yesterday in his family village of Palhalan. His funeral was attended by thousands of people honoring him by chanting & singing freedom slogans & songs. All shops in Palhalan were closed in his honor.

Ashiq’s family members said he was pushed into militancy in 2014 when government forces beat & seriously injured his father, a driver at a saw mill. He went missing later that year after different police stations ordered him to appear on “dozens” of stone-pelting charges. He would likely have ended up in jail & could possibly have been tortured. He was not unwise to leave.

We honor him as a freedom fighter. May he Rest In Peace after a turbulent life lived under occupation & deprived of human freedom. Our condolences & respect to his family for raising such a fine young man.