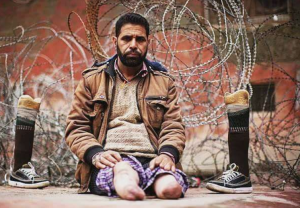 Nazir Ahmad Sheikh, 46, a torture victim from Handwara says he was picked up & tortured by the Indian army’s 14 Dogra Regiment in December 1994. Although he had no militancy or criminal record, Sheikh says the Indian army soldiers pushed his left hand into a charcoal oven, & rolled his legs over with a steel rod in order to extract a false confession of being a Pakistan trained militant & having a gun to surrender. He lost four fingers & both legs in the torture, & had to sell a piece of ancestral paddy land to buy artificial limbs.