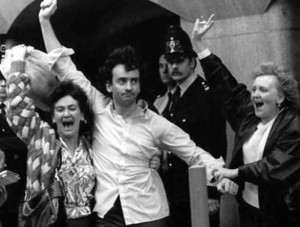 We should take a moment to honor the passing of Gerry Conlon of Belfast, Northern Ireland. He was a defendant in the Guildford Four convicted in a British court in 1975 for the bombing (in October 1974) of a pub frequented by British military personnel in Guildford, just outside London. After confessions were extracted by torture & intimidation, all four were sentenced to life in prison. They served 15 years before a defense campaign got the convictions thrown out. The bombing was in fact the work of the Provisional IRA & there wasn’t a shred of evidence presented at trial that the Guildford Four had any connections to the group because they didn’t.

What is called “one of the most high-profile miscarriage of justice cases in British legal history” does not end there. Conlon’s father, Giuseppe Conlon, a pacifist who evaded the draft during WWII, went to London after his son was arrested to render assistance. While there, he stayed with his sister-in-law, Anne Maguire & her family. He, Anne, her husband, brother, two children & a family friend, were all arrested in December 1974 for running an IRA bomb factory in northern London. They are called the Maguire Seven. They were sentenced in 1976 to 14 years in prison, served their terms, & were released–with the exception of Giuseppe, who died in prison in 1980. A 1991 appeals court nullified the convictions & they were publcly exonerated in 2005.

Another victim of this travesty is Conlon’s mother, Sarah, who worked in a scrapyard & in a hospital mopping floors & serving food to patients. She spent decades campaigning for her son & husband & lived long enough to see them both exonerated.

In his eulogy, Paul Hill, a fellow Guildford Four defendant (now living in the US), said Gerry Conlon was into music & football & “had no interest whatsoever in politics” before he was arrested. He was no outspoken champion of the people, but “an ordinary man, who suffered an incredible injustice.” But on his dramatic exit from court after his acquittal in 1989, Conlon called for the release of the Birmingham Six, another group of Irish men falsely incarcerated in England, & he continued to speak out against injustice.

In a 2009 interview, Conlon said: “Since I came out of prison, I have suffered two breakdowns, I have attempted suicide, I have been addicted to drugs & to alcohol. The ordeal has never left me. I was given no psychological help by the government that had locked me up, no counselling. Since our case there have been perhaps 200 others we have heard about of innocent people being released, Sean Hodgson being the latest, and probably a few thousand others that have not had the publicity. I would say the vast majority have almost certainly had problems with drug addiction, have been estranged from their families & disenfranchised from society – yet they have been offered little in the way of help.” Apparently exoneration can’t give you back your life or undo the damage done by injustice–especially if it isn’t accompanied by anything more substantial than a paltry “mea culpa” from the British courts.

The Guildford Four & Maguire Seven happened at the height of The Troubles in Northern Ireland. As a personal aside, when I traveled in England & Ireland during that period, I was aghast at the overt, aggressive & public racism directed at Irish & at Blacks by both police & civilians. Regrettably, it is my strongest memory of England during that time.

Though he was a leading character in the Daniel Day-Lewis film “In the Name of the Father,” I didn’t remember the Guildford Four case or know much about Gerry Conlon. But he should not leave this earth without our acknowledging his contributions & what we have learned from him: most importantly, that in extraordinary circumstances even the seemingly ordinary are the agents of social transformation. May he RIP.

(Photo of Gerry Conlon leaving the acquittal court in 1989 with his two sisters from Irishcentral.com)