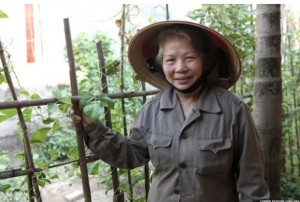 This is the 41st anniversary of the fall of Saigon when the North Vietnamese army routed the US military & ended the Vietnam war. Coming out of WWII & the Korean War, the US seemed an impregnable military force. But the Vietnamese regular army & guerrilla forces who had been fighting Japanese & French colonialism for 40 years were politically resolute & militarily steeled.

Women played an important role in the Viet Cong in both the guerrilla & regular army. This woman veteran is Tran Thi Thon who served in the North Vietnamese army from 1965 to 1975 delivering supplies from North to South Vietnam. She said the day she remembers most vividly was when they came across a downed American pilot. He had lost his shoe so she gave him her own & then wiped the blood off his face with a hankerchief. She said, “I felt very sympathetic because he was just another human & he didn’t want to be in this war just like I didn’t.” The pilot told her crew to hide because a US rescue helicopter was on the way & would shoot them but the helicopter never came & the pilot was captured by the Vietnamese.

During one of her missions, her team came across a yellow, cool liquid covering the jungle. To refresh themselves, the team picked the leaves & rubbed the substance on their skin. It was of course Agent Orange. The skin on her body is now covered in scars which she has had several operations to repair. Agent Orange has 24 different symptoms, including cancer & birth disabilities in ones offspring. Her son died of cancer at the age of 35 & her daughter is physically & mentally disabled.

Vietnam is still suffering from the war; many hundreds of children (as in Iraq) are born with catastrophic disabilities & only families to care for them. There are still thousands of land mines & soil contaminated by Agent Orange & Napalm.

Many people are disappointed the Vietnamese regime is going the neoliberal route. But nothing can take away the contribution of the Vietnamese people to humanity when they routed the mightiest military machine in the world & when their struggle showed humanity the power of resistance & international solidarity.

Many people today fighting the yoke of neoliberal colonialism do not have the military advantages of the Vietnamese. Building international solidarity, the second phalanx of opposition to tyranny, is essential to compensate for the lack of military force.

Our fullest respect to the Vietnamese resistance as we rebuild the international antiwar movement to render the same solidarity to Afghanistan, Pakistan, Iraq, Syria, Somalia, Yemen, Palestine, & elsewhere.