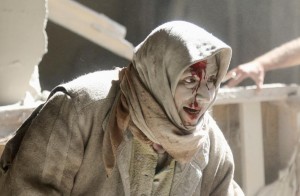 Since only the Syrian regime & its Russian ally have access to aerial power in Syria, it would be major news if US or other NATO warplanes were bombing Syrian territory with barrel bombs & chemical weapons. Most likely they would be shot down by Syrian & Russian warplanes & Armageddon would begin.

Supporting Assad & Putin in bombing entire cities just because the US claims to oppose Assad is the dominant view on the left–making it hard these days to tell the libertarian left from the right.

This is a woman injured by Syrian or Russian airstrikes in Old Aleppo, Syria. Explain to her how it’s for the greater good.