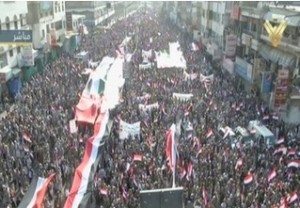 Only three media sources have reported on this massive protest yesterday in Sanaa, Yemen to condemn both the Zionist aggression against Al-Aqsa mosque in Jerusalem & the Saudi-led bombing aggression against Yemen. The protest was called by the leadership of the Houthi movement.

The purpose of Saudi bombing, which has gone on since late March, is to destroy the popular democratic movement of 2011. This protest would suggest the revolution lives on.

The people of Yemen show the way forward in re-building the international antiwar movement even while their country is being bombed to smithereens.