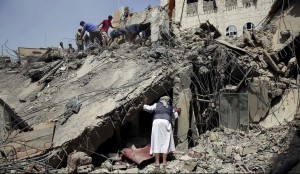 On the same day tens of thousands protested in Sanaa, Yemen, against the Saudi-led bombing (now in its sixth month), others like this woman in Sanaa were searching the rubble of their bombed-out homes for survivors.

The Saudi-led, US-armed coalition includes the monarchies of Bahrain, UAE, Qatar, Kuwait, Jordan, Morocco; Egypt, a military dictatorship; & Sudan, a country repeatedly condemned by the US & UN for genocide in Darfur & for slavery.

Human rights groups accuse the coalition of “potential war crimes” but hedging the accusation with that “potential” (just like they did in Gaza) makes a mockery of their commitment. When Saudi war planes are bombing schools, hospitals, residential neighborhoods, refugee camps–now for six months–there’s no “potential” thing going on here. When there is evidence Saudis are using cluster bombs, there’s no “potential” thing happening but unmistakeable, verifiable human rights & war crimes.

It doesn’t matter that the US & Saudi Arabia refuse to sign the international treaty banning cluster munitions signed by 116 other countries. It’s still war crimes in international law. One could also say, these are crimes by every standard of human morality, but there is no morality in modern war–only barbarism.

The Yemen uprising of 2011, where women played such a leading role, inspired the world & was forced to retreat. The Saudi bombing is to finish the job off of destroying every vestige of resistance to tyranny & US intervention, which included years of drone bombing allegedly against al-Qaeda.

Our deepest respect to the people of Yemen for standing up midst the bombing & marching in solidarity with Palestinians & in defiance of the military aggression against them.

As we assemble international antiwar forces to commemorate & grieve the 14th year of the war against Afghanistan, we should include placards demanding the end of war against the people of Yemen.
(Photo by Hani Mohammed/AP)