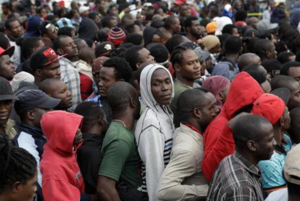 This is the 7th anniversary of the 2010 Haitian earthquake. The looting of that country headed up by Bill Clinton & Hillary Clinton, both acting as representatives of the US, & the scale of US criminality committed against the Haitian people is beyond barbarism.

There are now thousands of Haitian refugees traveling to Brazil & with African & Asian refugees attempting to make their way through Latin America, Central America, Mexico to the US border to apply for asylum–an odyssey of nearly 9,000 miles (14,485 km).

These are Haitians last October lining up to interview with an immigration agent in Tijuana, Mexico near the California border. US immigration can only handle about 75 people a day. Until September 2016, Haitians were eligible for Temporary Protection Status against deportation for periods from 6 to 18 months, subject to renewal. But since then US Homeland Security sticks them in detention facilities & processes them for deportation back to Haiti. Most of the thousands waiting to be processed at Tijuana don’t realize that they don’t have a snowball’s chance in hell of receiving asylum.

Our fullest solidarity with the Haitian people in bouncing the US military & looting apparatus out of Haiti. Haiti for the Haitians.