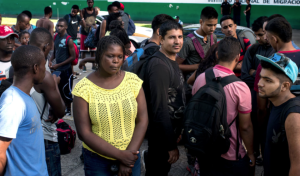 According to local news, just across the US border in Reynosa, Mexico, immigrant shelters are increasingly serving African & Asian undocumented immigrants. That is true along the entire southern US border from California to Texas & has been since 2011.

Africans from several countries & Asians (mostly Bangladeshis & Indians) have chosen to travel to Brazil because their destination is the US. They each pay thousands of dollars to an organized network of human smugglers for false papers to cross them through 10 countries on foot, boat, & bus to the border of Mexico. That involves traveling in overcrowded fishing boats, trekking through mosquito-infested jungles, dodging armed bandits & immigration authorities, temporary encampments.

Because Mexico has no deportation agreements with some of the African countries of origin, Mexican authorities will issue Africans transit permits to get to the US border. Most, probably those with false papers, do not register for permits & must navigate the treacheries of the 1,450-mile trek on their own.

Mexico is hardly a model of enlightened immigration policy. It functions as the southern flank of US immigration & in 2015 deported more than 165,000 Central Americans. It also has one of the highest immigration detention rates in the world, including of children, & in 2015, detained 190,000 from around the world.

African refugees want to get to the US border because individuals from Guinea, Liberia, Sierra Leone, Somalia, Sudan, South Sudan are given US Temporary Protection Status against deportation for periods from 6 to 18 months, subject to renewal. It doesn’t mean US Homeland Security always honors that amnesty because it is also supposed to be provided to refugees from El Salvador, Haiti, Honduras, Nepal, Nicaragua, Syria, & Yemen & as of September 2016, it began detaining & then deporting Haitians.

There are now thousands of Africans encamped along the US-Mexico border because the US grants asylum to only 50 Africans a day. That’s why the US Border Patrol reported that it apprehended 6,126 African & Asian refugees trying to cross illegally in 2015. In the first seven months of 2016, nearly 8,000 Africans & Asians had registered with Mexican immigration in Chiapas. Just to process the registered would take US officials over six months when the International Organization for Migration estimated that 20,000 more African refugees were already en route from Brazil to the US.

The US is trying to involve Latin American countries in policing & containing refugee transit to the US & has deployed immigration agents to Mexican immigration facilities on the southern border to impede the traffic from Africa, Asia, & the Middle East.

This photo is African, Asian, Haitian & refugees from other countries waiting to register with Mexican immigration in Tapachula, Chiapas on the southern Mexican border.